“The Job” from Lucia Films

Regenerating like the Phoenix of her namesake, Phoenix Fire (Mckenzie) has never regretted her power more. Captured by a pair of veteran thugs under the employ of a mysterious boss, she is to be transported to the base via an armored van. The exasperated thugs must subdue her again and again on their villainous road trip, but her powers of regeneration may well be her undoing if she is unable to escape before reaching their destination…

Follow our beleaguered villains on one of the worst jobs of their life in this dark comedy thriller. 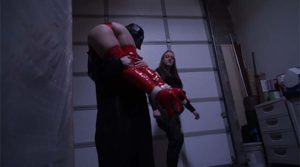 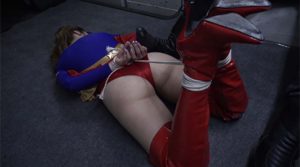 Hope you do more with Mckenzie!

Well, that was an incredible video! A very early candidate for SHIP movie of the year. The setting was so innovative, and the confined space really made it visceral and very realistic, loved it! The little bits of comedy were spot in and didn’t get in the way of the film (have I seen you somewhere before? 😀 😀 :D) and the action was excellent, a very good back and forth battle but with the guy dominating. The repeated deaths were inventive as well, which is hard considering how many deaths have been done (the bagging was intense, and loved… Read more »

As always great job. Lucia always does something unique or pushes the bar on certain elements in this fetish and genre, not seen anything like this done before from other studios. Like I said before you are one of if not the best producer out there for heroine content. I have seen you do something with the top heroine actresses apart from the girl from imperial nightmare from rye i hope you get a customer where you work with her someday or gigi that would be amazing to see.

This was fantastic!!! Great twist on the theme and all the deliciousness needed!! Hope there are more!!

Dude, I am sincerely hoping you do a sequel with Mackenzie returning as Phoenix Fire. I’d love to see a sequel, after she’s delivered wherever they are taking her, and she’s subject to their employer’s whims.

A sequel would be great, but what about one showing what happened before? How was she defeated before “The Job”.

another video with Mackenzie as Phoenix Fire would be awesome

This was a AWESOME movie worth every penny i paid for it i would love too see more films with this actress and the two actors they were all great fantastic job everyone.

I had to create this account just to say how much I like the new girl McKenzie. She sold this well, fills out the costumes just right and she’s just a breath of fresh air. Hope to see more of her just not over saturated but I’ll take what I can get for now. I’d like to echo what someone said earlier I’d love if she could mix in some actual hardcore every once in a while kind of like Ashley Lane if she’d be game for it. If the word can get back to Mckenzie thank her for coming… Read more »

Wow! I have some leave coming up in March and I think Lucia is going to be taking most of my overtime pay for that month. I have at least three of his movies on my wish list – including this one!

Love this film. So unique and refreshing. I think anyone who cares to recreate it is going to have issues topping all that movement inside a van.

I was waiting for “Oni Part 2” then i saw the pics for this one and the comments, so i’ll grab this one, it looks really good too.

Every single second of this film was great. Every single second of this film was immensely enjoyable for me. I’m not going to say that this is the greatest thing since slice bread or the greatest SHIP film ever. I’m not saying it doesn’t have flaws. What I am saying and what I’m about to say is that everyone involved—the actors, the director, the editor, THE ACTRESS, the crew—put on an amazing show that I personally don’t think anyone can afford to miss out on. This is certainly my favorite film from Lucia to date. It’s certainly the hottest and… Read more »

This delightful film was refreshing, Lucia. I found the story entertaining to the extent the story lead to peril. Not even tame sexual acts—by my standards—distracted from my enjoyment. Lucia, you’re my number one producer as of now, and I’m rooting for your success. Please make more fun content like this one. The only negative feedback I could give is lighting of the heroines face. It doesn’t have to be much, just enough to bring out detail, rather than near shadow. The flickering lights during the electrocution seen were fantastic. I see your intent is to “paint” with light, which… Read more »

I, ONE THOUSAND PERCENT agree with you Heroine Falls. I would like your comment 10 times if I could.

I quite liked this one. The actress was gorgeous, full figured with porcelain skin, the outfit was sexy and the van setting / close quarters combat was defiantly different. I also liked ‘Oni’ and ‘game over part 1’.

Great job coming up with an original concept for a heroine peril video: Captured heroine struggles during transport. A simple enough premise, and unique all the same. Thinkin outside the box 🙂

Ah Lucia, you outdo yourself good sir/madam!
Your delectable tales are again original and inviting. Look forward to this, hows that influence from Mr Noir going? Also any thoughts on Vore?

Unfortunately it has been too much of a busy/choatic schedule these past two months to really sit down with Mr. Noir long enough for more than a quick chat. Something I hope to remedy soon! As for Vore, I don’t think I’ve ever seen that tackled in live action SHIP before. Could be wrong though! (Maybe with a giant plant monster? =p)
I suppose if someone was willing to help fund such an elaborate prop creation like that, it could be done! But it would certainly be quite the undertaking.

Other than Giga studios no i don’t think it has been done but your work so far shows i think you would have the ability to deliver. Sadly your right though budget is the problem and i couldn’t front up the cash alone. Maybe a crowdfund effort?
Until then keep doing what your producing, we’re loving it. Keep them original!

Loving the look of this

Thank you! We had a blast filming it.

Will there be a pre- or sequel? I’d invest in that.

McKenzie is a revelation and THE new rising star of the genre.

She is certainly a treat to film with. She was so hardcore in this movie! Slamming into the walls and throwing herself around with the villains. Zero ****s given! It was really impressive.

Yep, I bought this because of Mckenzie along with her other film. Loved the sex scenes. The fight scene was sort of cramped and uncomfortably awkward in the tiny back of the van. I wouldn’t suggest doing that again. But overall glad I bought it! Seems like Mckenzie is just itching to make the jump to hardcore by watching her scenes!

Thank you for your patronage and thrilled you enjoyed it! We personally loved the cramped, tight feeling of the combat in the confined spaces. Made everything feel desperate and visceral, and it was a lot of fun bouncing off the walls and floor. But! We totally understand your view on that and we’ll just have to see down the line!

Cramped in the back of a van is exactly what made it so sexy. A confined space where a superheroine can’t extend herself and use her powers. I loved it

Glad that was picked up on, Bernie! The cramped spaces kept her from being able to truly make use of her extensive powers without killing everyone in the van, which of course as a heroine- she was unwilling to do. Otherwise, even two veteran thugs would have had their hands full with this powerful heroine.

May this actress’s tenure in this genre be long and fruitful.

Awww.. thank you Lord of the Snot! Glad this one was lit to your liking!

This is super creative, and entire movie taking place inside a van.

Much appreciated. Not sure we’ve seen anyone do it before, so it seemed like a really fun idea. Plus! What is the point of having a giant, scary white van if you can’t occasionally have insane rigamaroles inside of it? The shocks were put to the test.

This looks amazing, interesting, and unique. I can’t wait to see it. Dark comedy is my jam!

As a Deadpool fan, I am not surprised! Hopefully this one tickles your fancy, and everything else.

How many times did someone bang their funny bone or get a lump on the head during filming?

Ahahaha. Imagineer, as always you are insightful in clever ways. I personally ‘still’ have cuts and bruises from this shoot. Weeks later. As do a few other members of our crew. It was… crazy, all of these people crawling around and trying to stay behind the camera inside the van during fight scenes. At one point we had a PC hiding in the passenger seat with water and a fan to cool everyone down between takes. If you ever see a large leather jacket in the passenger seat, that is her underneath it!

I always feel slightly sad when there are no low blows!

Sorry guys! We have low blows in very nearly every film we make, but they didn’t make it into this one! Not every film will have every button in it, or it would become a rote process of just checking them off one by one every film and that can get samey. Trust that plenty of other films will have plenty of low-blows. (We even have a custom in the line-up that may focus on them soonish!)

Yeah, no, I completely get that and I’m likely going to pick this up just the same. 🙂

So awesome to have more producers churning out vids that can rival Rye, NGC, SHF, and TBFE and the like in quality. Always a nice surprise.

Very kind of you Rover, thanks! We will keep doing our best to play with the big boys (and girls).

Lit. I was hoping we would see more of this actress. Very happy it came so soon. Will be picking this one up for sure.

Happy to deliver! She is a treat to work with.

If you make a sequel, you should gender swap the villains. Thats what Alex Bettinger did for the Super School Girl sequel, where he had Wonder Co-ed’s villain be a man, since the first video had a woman for the villain. Preferably an actress with muscles like Megan Avalon or Brandi Mae or that towering strong actress Goddess Rapture.

Hell, even have Mckenzie over power the muscular villain in Act 1.

Why the hell does your user picture have the international white nationalist sign hand gesture?

Are you a Neo Nazi?