Immerse Yourself: with Vampirella 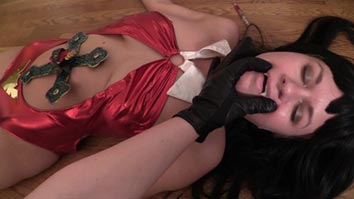 In the spirit of Halloween this weekend, VelvetsFantasies brings you a special Halloween addition of the Immerse Yourself series!

Our scene begins as you lay on the ground…now the helpless victim of the beautiful and intimidating Vampirella. She wickedly smiles as she brags about how easy it was to capture you, not noticing as your hand creeps to your pocket. You whip out a crucifix and she gasps. It turns out this is no vampire’s trap. This was all your design. She starts to weaken and you start your fun, using various knockout methods and toys to put her out, only to use the crucifix to keep her in a weakened state when she comes to. At one point she manages to disappear on you, but her lack of energy makes it easy for you to subdue her (via a garlic-laced drug-filled syringe). You plunge it into her beautiful and cold skin twice, relishing her reactions to the chemicals as she fades away yet again. The predator becomes the victim as you rag doll her limp form…placing the crucifix on her bare stomach in order to keep her out. One DOES have to make an escape after repeatedly knocking a powerful vampire out, after all… 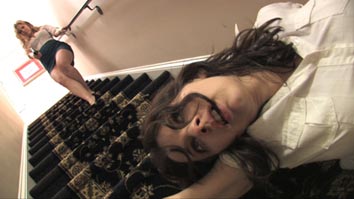 Another day…another deadly mission for Jacquelyn Velvets. Her target? A house filled with clones…all created using the evil Luna’s DNA! Velvets’ happily takes the mission and makes her way to the clone lair with stealthy ease. One by one, she takes the clones down with an opening shot from her handgun, letting them writhe in pain. Sensual groans escape each clone before a final shot takes them out permanently, and Jacquelyn makes her way through the entire platoon with her trademark stealth, efficiency, and witty repartee. A final bedroom showdown features Agent Velvets taking out THREE clones back to back, leading to the end of her mission…and some much needed target practice! 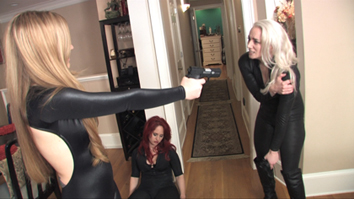 Knockouts, twists, betrayal, seduction, and three of the sexiest performances you’ll see all year: this one has it all!

Based off a custom script! We fade in on the lovely Agent Jacquelyn Velvets, who’s been sent to assassinate the beautiful Andrea Rosu, but upon laying eyes on the busty redhead, the devious Velvets formulates a backup plan that involves a bonus to her already established pay. She tracks Andrea and confronts her in the bedroom, but the shocked spy faints after feeling Jacquelyn’s gun against the back of her head. Jacquelyn hears a noise in the next room and hides, placing Rosu’s unconscious body on the bed. Another lovely spy enters the fray and Velvets gets the jump on her, but the new player tears the gun from Jacquelyn’s hand and turns it on her. A shocked look possesses Jacquelyn’s face as she recognizes her former partner (and lover), the stunning Elsa Ives. Elsa attacks and the two exchange blows and KOs…but Jacquelyn manages to trap Elsa in a tight and decisive sleeper hold. Panicked, Velvets convinces Agent Rosu to trust her and the two try to make an escape but Elsa awakens and chases the two agents down.

And this is where it gets complicated…

What proceeds to unfold is a series of twists, turns, kisses, and burns…as things turn out to be a shade darker than what they seem. Knockouts and drama ensue, including a final reveal that leaves one agent down for good…and the rest locked in a passionate life and death embrace. 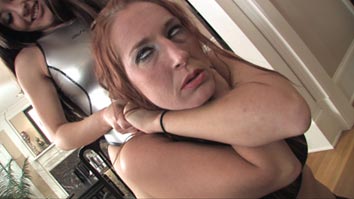 We fade in on Jessie Belle and Jacquelyn Velvets as two burglars who have spent weeks casing a specific house in an affluent neighborhood. They break in and freak out over all the goodies in store for their fencing operation, but a sound from the bedroom gets their attention. They find the home’s sleeping owner (played by Sumiko) and discuss their next move. Jacquelyn suggests some lethal action but Jessie advises against it, only to turn and find their potential victim…gone.

Before they know what’s happening, a flurry of massive blows connects with the thieves chins from an attack too quick to catch with the naked eye. They get repeatedly bashed in the face until a final forced headbutt leaves both baddies out cold and on the floor. Sumiko suddenly appears behind them,
and it’s clear that this lovely little lady is NOT what she appears to be! She decides to have a little fun and awakens Jessie…then pretends to faint from fear after she stands up. A confused Jessie wakes her partner up and carries Sumiko over her shoulder as she decides to continue with their burglary. Sumiko, quick as lighting, knocks Jacquelyn out with a face punch while still in the carry, only to end Jessie’s consciousness with a reverse kick to the face! Jessie collapses and Sumiko lands on the bed, smiling as she decides to reveal her true self. She stands and transforms into her superheroine alter ego (she never gives a name…and that’s just the way she likes it) and leaves the room, decked out in a sexy silver suit…and happy with the new cat and mice game she devised during the transformation!

Jacquelyn and Jessie come to and try to escape, but Sumiko has a series of KO kicks, a brutal double karate chop, and a straight jacket choke hold waiting for them…and soon both burglars are out cold on the couch. Sumiko disappears yet again and the devilish duo regain consciousness. They decide to make a break for the kitchen door but (needless to say) Sumiko is waiting for them. Jessie grabs a cast iron skillet and slams it into Sumiko’s skull…with zero effect. She tests it on herself and cries out in pain, going for another sweeping blow that Sumiko ducks, leading to a sudden KO strike that collides with Jacquelyn’s jaw! A stunned Jessie grabs her partner as Sumiko shows a little mercy. She agrees to let them escape but tells Jessie that they’ll both end up in jail for the rest of their lives if she ever catches them committing another crime.

Jessie agrees to the terms and picks Jacquelyn up over her shoulder, running away and sobbing as the powerful Sumiko calls “Y’all come back now, ya hear?” out from behind them.