The poll is closed and results are in. Find out who wins this Friday at http://ngcchampionship.com

Sonica, the ‘Mistress of Sound’, was given a ‘Baptism of Fire’ in the Championship last time out when she squared off against the highly dangerous Commander Curse. She was soundly beaten and went back to her cell de-moralised. Unfortunately things don’t seem to be improving as in this second battle she must face ‘Malicia Divine’, a woman who is certainly Curse’s equal in the psychotic stakes. 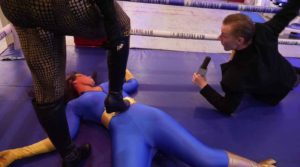 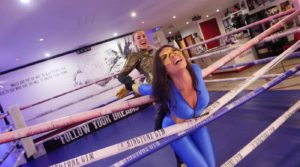 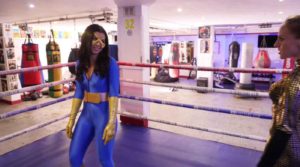 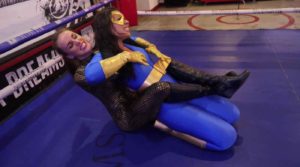 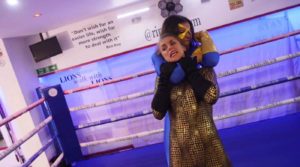 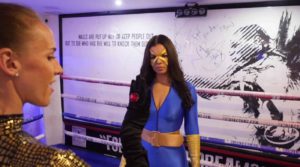 There is hope however. The Announcer proposes a best of three rounds battle. In the first round, Malicia may use her power ring against a powerless Sonica. In the second round Sonica may use her Sonic Scream against a defenceless Malicia. If we have no winner at this point then the third round will see all powers removed and fighting prowess alone determining the victor. If Sonica can make her own power count and then defeat Malicia in mortal combat, she can win. Unless of course the viewers of the contest in the 7th Dimension don’t want that. Does Sonica snatch a win? Or is Malicia going to take another divine victory?

Early-Birds also get unseen footage from a one-time battle between two classic characters. Before the Championship it would be impossible to imagine Bluebird and Lady Victory ever being in the same place let alone fighting for all they are worth, and yet it happened, and you get to enjoy even more of it if you purchase ‘Sonica v Malicia’ within 48 hours of release on Friday 1st February. 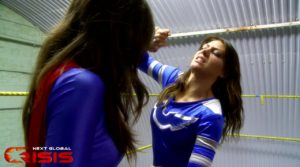 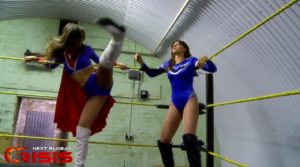 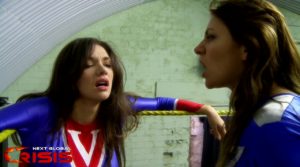 So many great comments and thoughts here. I’m tempted to just put ‘yeah, I agree’ but there’s a few things I’d like to comment on. Sonica; I like her, I like her a lot. She’s a fine actress and she sells everything very well. I especially liked her sobs and moans when Malicia had the upper hand. I also thought she did the self punching and choking very well. One thing I really loved about her performance here was when she delivered her final, knock scream. Her body language and facial expressions were perfect; it was a if she was… Read more »

This is of course OUT NOW at http://ngcchampionship.com – Very pleased to read good responses, I am glad people enjoyed it. Just wait and see what we’ve got for you next week…

Bravo NGC team! SONICA is amazing! I really enjoyed this video and I like her belt the way it is. It compliments her figure very nicely! Please keep the costume the same because it really works well on her! The actress does a terrific job selling each hit and I particularly enjoy watching the eye rolling knockouts. As far as her fighting goes I noticed that she seems to know her way around the ring very well. I was impressed. Last video was slightly lopsided so we couldn’t see her in action as much. The NGC Champ series is a… Read more »

I repeat: Sonica is a FINE woman. And a good actress. And a great heroine in peril. And when she’s pushed around, stretched, and beaten by the malevolent Malacia Divine….well that’s something I enjoyed a lot. This film is also another great addition to the near perfect run of form the Championship has been on for the last year. Delivering quality SHIP film material that’s sure to excite people in much the same way it did for me. Performance wise, I think Sonica is even better in this one than she was in her match-up against Curse. And there was… Read more »

So, this one was really great! In only her second appearance, Sonica has vaulted into my second tier of current NGC heroines. (I can’t ordinally rank them all, because I like practically everybody that’s presently making videos with NGC, so I’ve got tiers. Starshot is in Tier 1 by herself. Tier 2 has a lot of heroines.) Sonica is really beautiful, but Malicia’s a dish as well, and she tears into this episode with gusto. I also love the way the Announcer sucks up to her. She’s absolutely spectacular as a catty, confident cutthroat, but she’s also really excellent on… Read more »

I agree with you on so many points here! Definitely agree with you about the whole Tier thing. I like virtually all the heroines in NGC and I too think of them as being in Tiers. Performance wise, as a heroine in peril, Starshot is practically in a whole other universe as far as I’m concern. And like you Tier 2 has a bunch of heroines closely knit together with Sonica, after this match performance, deserving of being in that tier. Interestingly though, when it comes to who’s my favorite, the Tiers get all scrambled and I’m not quite sure… Read more »

My tier 2 is composed of all the heroines that I might consider my second favorite (after Starshot) in terms of “who I’d most like to see in the next video.” I could talk myself into about 4 or 5 different heroines being in that second spot, thinking about different aspects of their performances. Anyway, I’d put Sonica in that tier after this one. Novelty is certainly a factor in Sonica’s favor. Since we don’t know much about her at all, there’s a lot left to see. I’d also absolutely *love* to see a video where a villain takes off… Read more »

I love the idea of Sonica’s belt being removed and used to restrain her, although I do think that, being as it has a buckle, it could be difficult to do and keep the pace of a fight going. Of course if she was stunned or semi-conscious it could really work well. I think using part of a heroine’s costume against her adds a nice element of humiliation, I made a light-hearted comment on the NGC blog a while back about Virtue’s suspenders being twanged mercilessly against her behind. It wouldn’t do her much harm, but she’d be mortified if… Read more »

I just watched this. Malicia is indeed an awesome villainess. Sonica like Erica looks so incredible in defeat. Her and Erica are my favorites on the active roster right now. The more one-sided their defeat the better. They both shine when it comes to taking one-sided beatdowns. Loved this episode. One of the better NGC Championship matches. BTW – Will you guys ever complete the trilogy of defeat for Erica vs The Dominator? I would absolutely love one more total defeat of Erica at the hands of the Dominator… perhaps even in her old style outfit? Anyway, great job on… Read more »

I’ve just watched this. If there’s a better villainess than the actress who plays Malicia in the entire genre then I’ve yet to see her!

SONICA looks amazing! can’t wait to see how she matches up with Malicia.

Sonica is such a fine woman. Particularly when sprawled out on the mat, KOed and crushed under Malacia’s heel.

Loads more info including trailers and previews, plus some seriously nice unseen footage.

@Dr_Mabuse, she sure was beautiful, I always want the villains to win, but I do like to see a good unmasking when the opportunity presents itself.

There’s no way Malicia can lose to this new upstart! I’ll be voting for a Malicia win and looking forward to seeing her gloat over Sonica!

Agreed. Both of their costumes are great, both are expressive actresses, and I would love to see them exerting themselves as long as possible in a knockdown drag-out match, but ultimately, Sonica would look best splayed out on the floor in abject defeat.

Absolutely! I’d also like to see Sonica unmasked, but I guess it’s a bit too early in her NGC career so it probably won’t happen for a while.

I don’t know… NGC used to have a masked heroine named “Catherine Marks” and she was unmasked in her first appearance.

Good point…I remember her, but it seems like a few years since she was last seen. I wonder if she’ll ever be back? She was seriously hot!

@Goon4hire: Yeah, she hasn’t been around for awhile. I mention her whenever I get a chance, though, because I liked her. The actress was beautiful, the costume was great, and the character concept was fantastic.

Catherine was a great. I thought her unmasking had a nice twist; they unmasked her but didn’t know who she was!

@Dr_Mabuse I try to bring her up from time to time as well in hopes that NGC will come up with something for her to be doing while all the supers are doing what they do. Her fight with the Heroinekiller is still my favorite episode ever, in spite of the fight being kinda short. I’d love to see her have to go up against Alaric.

Speaking of Catherine Marks, I also loved the villainess Georgina Shred. They shared an episode together and both have great acting chops.

@RyonaKing yeah, Georgina Shred was great! NGC has had so many spectacular villainesses (who don’t get nearly enough shine, IMO) it’s hard to pick a favorite. I wrote up a list of my favorite NGC videos by heroine on the Winter Sale post, and in my brief bit on Catherine Marks, I mentioned Georgina explicitly, because their video was one of the only chances to see Georgina. I got the distinct impression that more was planned for both characters, but the actresses became unavailable, or something. @Rob_Hinx I remember that too. It was a little ironic, since they worked for… Read more »

@Dr_Mabuse there’s no reply button again but this deserves a reply-
“It was a little ironic, since they worked for the same organization!”
That was James and John Roman and their ‘water tight compartment’ ethos. If they’ve had a more open working environment it could have been so different!

@Rob_Hinx: exactly! I enjoyed the fact that they didn’t know who Catherine was because it revealed how siloed/secretive Red Mist was.

@Dr_Mabuse -whispers- I think someone is listening in here!- 😉

Ordinarily, I vote for the combatant who has the worse record, which is Sonica here. However, I’m not sure how I feel about Malicia losing to someone who is not Starshot. After all the abuse SS has taken from Malicia, I feel like she should be the one to hand Malicia her first loss.

There’s only one thing to do….fiiiiiiiiggght!
Oh, they are already 🙂

With a bit of luck they’ll be 2 endings.